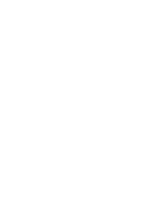 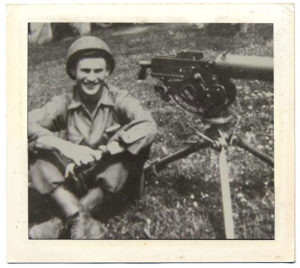 The story of Four Tails Vineyard starts back in the early 1940s when Cale’s grandfather was conducting training as a gunner on a B-17 in the desert Southwest. He loved the unique beauty of the desert and never forgot how much he enjoyed being there.

Fast forward to the late 1980s when Cale’s grandparents (Lew and Alice) decided to sell their farm in Conneticut and build their dream home in the desert. They settled on 80 acres in Pearce and named it the Winged Foot Ranch. This is where Four Tails Vineyard is today. They had a few head of cattle, chickens, roses, and other hobbies to stay busy. 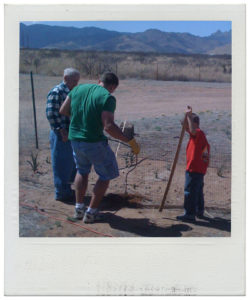 Cale had been out to visit and decided that Arizona was the place to be after college. He moved to AZ in 1996 and stayed with his grandparents at the ranch. After moving to Phoenix, visits to the ranch became monthly. Barb was introduced to Lew and Alice and joined in the regular visits.

Soon after Cale and Barb were married, during a visit to the ranch, a new angus bull was born. He was all black with a white spot on his chest. A couple of weeks later, Cale and Barb adopted a black lab puppy and named him Angus, since he had the same markings as the bull calf.

Cale and Barb soon moved to California and visits were limited to holidays when they were in AZ. Career opportunity lead them back to AZ in 2004. Soon after they met Bonita (Bono) who was Lew and Alice’s basset hound puppy. She was full of energy and always happy to see Cale and Barb. Lew decided that he was not able to care for Bono properly and Cale and Barb adopted her. 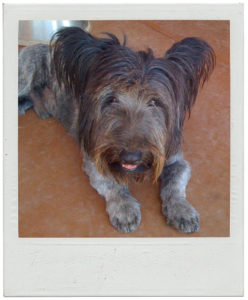 Years later, Alice passed away and Lew had bought a Skye Terrier puppy to keep him company. He was flown in to Phoenix and Barb and Cale picked him up at the airport. His crate had a sticker that said “Delta DASH”, so the name stuck. After Lew became ill Barb and Cale took Dash and introduced him to the rest of the pack. Dash visited Lew, who was always happy to see him.

After Lew passed away the ranch was up for sale. Cale and Barb were wine tasting in Cottonwood one weekend and on the way home decided to buy the property and plant some vines.

Cale, Barb, Bono, Dash, Bubby, and Bruno all love being at the vineyard. The property hold so many great memories and provides a unique peacefulness unlike anywhere else. Although the property has transformed significantly, Lew and Alice’s presence are always felt.

Today, there is always something happening at Four Tails, even in the off-season. We begin pruning our 5 acres in February and prepare for bud break around April if all goes as planned. Then it really picks up with continuous pruning and thinning throughout the vineyard as the vines begin to flower and then become our wonderful wine grapes. The four tails love the vineyard and are generally found laying around and watching us work (some life they have). Cale and Barb prepare for several festivals each year, which is where most of our wine is sold. As we continue to build our inventory and produce more fruit, we’ll be looking to get out to more local stores. Keep up with our festival schedule on our calendar page.